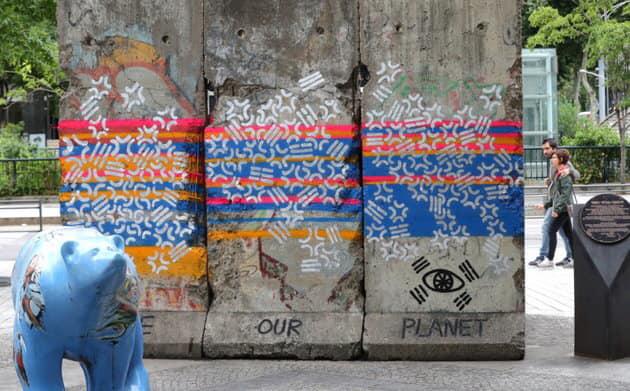 Graffiti on the remnants of the Berlin Wall in Seoul

AGL set an important legal precedent that extends the space for free expression to graffiti in South Korea.

AGl represented Korean artist, Taeyong Jeong aka HIDEYES. In 2018, HIDEYES spray-painted symbols of peace and reconciliation on a section of the Berlin Wall installed in Seoul’s Berlin Square. The charge was that of destruction of public property and the proposed penalty was a prison sentence.

AGL fought to elevate the case as an example of the improper ways in which street artists are treated around the world and argued that graffiti has an expressive character contributing to the exchange of ideas and opinions, which is essential for a democratic society. It was argued that graffiti should enjoy the same level of protection as verbal expression. Within this framework, a criminal conviction, or a custodial sentence against Mr. Jeong would amount to an unjustifiable and disproportionate penalty and is incompatible with international human rights law. The argument also included the idea that painting the Berlin Wall could not and should not be viewed as an isolated act of vandalism. Completely striping the graffiti of all meaning and context is to ignore the artistic gesture altogether, alongside its meaning and symbolism.

Most graffiti artists use their art as a vehicle for their ideas, feelings and political opinions and that as a result, their art is a form of social and political commentary deserving of the protection afforded to speech, in general. We therefore focus on the need to place street art in the larger context of freedom of expression and remind domestic and regional courts of the international obligations they are held to respect, obligations which emerge from their allegiance to democratic values and respect for freedom of expression.

We also fight to recognise illegal graffiti as creative acts and argue that illegality is not a basis for denying copyright protection for their authors. It is not a judge’s job to assess the artistic value of a graffiti or the form of expression the author chooses.

In the absence of an explanatory context, graffiti can be easily dismissed as senseless provocation. But graffiti is first and foremost a form of expression highly dependent on its context. The place where it is performed and the support it is performed on bear the same importance as the painting itself. Therefore, we emphasize the need for a proper assessment of the context-specific nature of graffiti, as well as of its ephemeral and rebellious character.